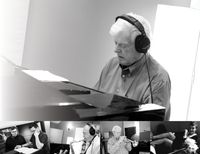 The Hutchinson Andrew Trio (HAT) is looking forward to getting back onstage for some special shows this coming December in tribute to the late, great Hon. Tommy Banks. As one of western Canada's musical icons, Tommy had a great effect on the careers and approach of all the members of HAT as well as countless others across Canada. In celebration of what would be his birthday, the Hutchinson Andrew Trio will be joined by close friends and colleagues of Tommy including saxophonist PJ Perry, trumpeter Al Muirhead and vocalist Mallory Chipman. The group will be performing music closely connected with this JUNO-winning master of the piano including some of his favourite tunes and his originals. Come join us for this celebration of Albertan and Canadian jazz icon Tommy Banks which will be livestreamed and recorded for future release on Chronograph Records!

About Tommy Banks: The Honourable Tommy Banks was known as a pianist, conductor, arranger, composer, TV personality, actor, producer and politician (1936-2018). Tommy had an unparalleled, multi-faceted career spanning more than 60 years in virtually every aspect of the entertainment industry in Canada. A professional jazz pianist at age 14, he went on to lead his own bands, conduct symphony orchestras around the world, direct musical ceremonies at international events, host his own long-running television show, and act in film and television. He also served nearly 12 years in the Canadian Senate. Tommy was chair (1978–86) of the Alberta Foundation for the Performing Arts and chair (1983–87) of the music program at Grant MacEwan College, Edmonton. He was a member (1989–95) and a policy consultant (1996– 98) of the Canada Council, and the chairman of the Edmonton Concert Hall Foundation (1989–91). In 1999, Edmonton named a street Tommy Banks Way in his honour. In 2010, he received SOCAN’s special achievement award for his contributions to Canada’s music industry and musical heritage.