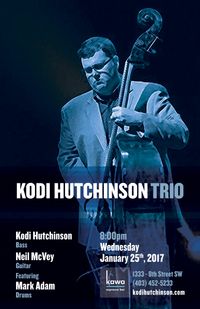 Joining the trio for this special performance is Kodi’s good friend and colleague Mark Adam who he grew up with playing in the Calgary jazz scene.

Percussionist/Drummer Mark Adam is fluent across a wide range of musical styles. He has played with many leading musical artists across Canada and internationally including jazz with Laila Biali, Dave Restivo, David Braid, Carol Welsman and Mike Murley, classical performances with the Calgary Philharmonic Orchestra and Symphony Nova Scotia, modern dance work at the Toronto Dance Theater and the National Ballet School and with country music artists such as George Canyon and Dave Gunning. Mark is a collaborative performer who has spearheaded performances of large works by Steve Reich, George Crumb and Bela Bartok while also being active as an improviser with musicians like Derek Charke, Dinuk Wijeratne and the trio Sanctuary. He is a powerful public speaker who engages students and adults to reflect on their relationship to music and the people around them. He has received the Queen’s Diamond Jubilee Award for contributions to community, won teaching awards at Acadia University in Wolfville, Nova Scotia where he works and teaches and received a 2015 East Coast Music Award for Classical Recording of the Year with collaborator Derek Charke.