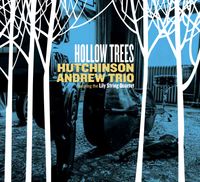 The multiple-award-winning Hutchinson Andrew Trio is a vital and distinctively western force on the Canadian and international jazz scene. The group’s third album, 2013’s Prairie Modern, was featured in jazz bible Down Beat magazine, which called the album “a terrific listen, with great musicianship throughout.” The current fourth album, Hollow Trees, was written specifically for the seven-piece configuration of the HAT and the Lily String Quartet. Its music features powerful, moving compositions by HAT pianist Chris Andrew that combine the beauty of classical chamber music with the drive and interplay of jazz.

It’s music that rewards the committed listener. Shifting textures, melodies, rhythm and tonality reveal themselves constantly throughout each track, telling a story that is best experienced from beginning to end.

The trio’s many honours include Western Canadian Music Awards nominations for each of its previous three albums, and the prestigious TD Grand Jazz Award at the Montreal International Jazz Festival. Hollow Trees is the group’s most inspired work to date, and is poised to make an impact on the global jazz scene.